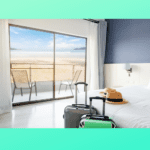 Don’t Bring The Baggage To The Marriage

Scripture Meditation: “And it shall come to pass in that day, that his burden shall be taken away from off thy shoulder, and his yoke from off thy neck, and the yoke shall be destroyed because of the anointing”

Janet was only seventeen years old when she started dating Tyson. Their relationship was on and off for a few years. They later reconnected in college and married five years later. They picked up great jobs in their city, and everything seemed like it was going fine.

Tyson began to notice that Janet was unhappy most of the time. He couldn’t figure out the source of her sadness.

What Tyson didn’t realize is that Janet brought some baggage with her to the marriage. She was stuck in a soul tie relationship with her ex.

Now, please listen to us, everyone comes into a marriage with a piece of baggage or two or three. It doesn’t matter how holy of a Christian you are; if you look carefully, you can identify a piece of baggage you need to get rid of.

One of the reasons new relationships fail is because we’re still stuck in the old ones and don’t even know it. Soul ties are invisible bounds that wreak havoc in so many relationships and marriages.

In our counseling office, we regularly identify soul ties as a reason many marriages suffer and some fail.

Remember, the goal of God is for you to have a strong, healthy and passionate marriage.

A healthy marriage is one that is free from baggage.

Marital statistics say that money, poor communication, and sex are the three biggest reasons why marriages end up in divorce.  We would like to present another theory, and that theory is unsolved personal issues.

Personal issues cause more divorces than money, poor communication, and sex could ever do combined!  Although we don’t have the scientific proof to back this up, we have sat down with enough couples to identify the root of a problem.  The root will always determine the fruit.

Your baggage might not be that of a soul tie; it might be other personal issues or even generational issues that you brought with you into the marriage.

Let’s take the money issue for example. If someone had a bad spending habit while they were single, what do you think would happen to that habit when they married?

They bring that same money issue into the marriage. This is one of the reasons why we are very strong proponents of premarital counseling. That exposes the baggage and weakness in you so they can get fixed or healed prior to saying “I do” at the altar.

Initially, one spouse would say that the other is so bad with finances it’s jeopardizing their well-being, but upon further inspection, there’s a root problem that the spouse is refusing to deal with.  That refusal to deal with the root issue causes the fruit of bad money habits to manifest. The unresolved root issue is the baggage that needs to be unpacked and sorted through in order for the money issue to be resolved.

Marriage is a magnifier.  Whatever you don’t like about yourself or have an issue working through will eventually come to light.  You now have someone who is with you 24 hours a day who can see your faults and weaknesses as clear as day.  After a while, they will begin to express their grievances with it.  The question is, will you be mature enough to work on them or, if possible, resolve them? Personal improvement requires the precious gifts of patience and forgiveness.

How to know you have a soul tie

Soul ties are formed through close friendships, through vows, commitments and promises, and through physical intimacy.

Not all soul ties are bad. God wants us to have healthy relationships that build us up, provide wisdom, and give godly counsel. God will strategically bring good relationships into our lives to form healthy soul ties just like in the case of David and Jonathan. See 1 Samuel 18:1 (AMP).

A few ways unhealthy soul ties can be formed include:

The dysfunctionality of your upbringing when left unresolved will invariably run your life into the ground. Until you deal with an issue head-on, that issue will continue to deal with you. When you realize that you have unhealthy habits, traits, behaviors, then you must get to the root of those things in order for them to truly leave your life.

So, based on what you know and understand, you have to take certain steps that will allow you to deprogram yourself and then reestablish yourself as who you are supposed to be with functional and healthy habits.

Now your baggage might not be a soul tie. It may be fear, anxiety, depression, lust, procrastination, addiction, laziness, self-abuse, domineering, controlling or whatever. Find your baggage. Identify your baggage before it bleeds into your relationship and causes a wreck.

Self-denial is the worst form of denial. It blinds you to your issues so they never get fixed. Please don’t be so self-righteous that you don’t see your baggage.

We want you to identify whatever baggage you carried into the marriage and get help, deliverance, prayer, or counseling to root it out.

You cannot have a healthy relationship until you are healthy!

1. What baggage did you bring into the marriage that you haven’t yet told your husband/wife?

2. What process have you taken to identify the baggage in your life?

3. How do you plan to help your spouse overcome their baggage?

Scripture Meditation: “Therefore we also, since we are surrounded by so great a cloud of witnesses, let us lay aside every weight, and the sin which so easily ensnares us, and let us run with endurance the race that is set before us” (Hebrews 12:1, NKJV).

One of the most difficult things to do is to let go of the baggage we carry. We carried them for so long that they’ve now become a part of us.

We’ve seen couples claim a piece of baggage and make it their identity.

One Christian man said to us the other day, “I am just an angry man.  That’s who I am, and I’ve been this way since birth.”

But the problem is that no one was born angry. Anger is not a fruit of the Holy Spirit. Anger is a spirit, and it’s of the devil. A Christian should never have the spirit of anger in them. Also know that some spirits such as anger can be inherited and passed on from generation to generation.

Here is what Paul said in Galatians 5:22−23 (AMP): “But the fruit of the Spirit [the result of His presence within us] is love [unselfish concern for others], joy, [inner] peace, patience [not the ability to wait, but how we act while waiting], kindness, goodness, faithfulness, gentleness, self-control. Against such things there is no law.”

The Christian man we are talking about lived with anger for over 40 years, and it was hard for him to let go—that’s all he knew. The problem is that marrying an angry man is a marriage from hell.

An unhealthy partner cannot build a strong, healthy and passionate marriage. You have to be willing to change, not only for your sake but also for the sake of your spouse.

Letting go can be one of the most arduous works to do. But the results are well worth it. Often times people don’t realize that the events of their past are still raging within their hearts. These events cause a leak. There’s also the baggage that will take someone to the altar prematurely seeking fulfillment and happiness in the arms of their spouse beyond what any spouse can provide.

Some of that baggage includes but is not limited to former unhealthy and toxic relationships, the relationship that our parents had with each other (if there was one at all), and dysfunctional personal behaviors and habits. These are all pieces of baggage that can weigh us down and put a strain on your marriage.

Now here is the hard part: Will you let go of the baggage?

Are you willing to forgive? Are you willing to get counseling or therapy, depending on how traumatic the events were? Can you openly admit that there is some inner work that you need to do? People can easily draw the conclusion that marriage doesn’t work, but the real problem is the two people not working their inner issues for the marriage to work.

1. What are some baggage you need to let go?

2. Do you think you need professional help to let go?

Adapted from the bestselling book Marriage From Heaven by Drs. Uyi & Faith Abraham

Vonza makes it easy to sell online courses, memberships, products, and turn your knowledge into income. Get started for free or choose a plan at

Uyi Abraham is an award-winning business coach, serial entrepreneur, strategist and a best-selling author. He has been educating people on business and success principles for over 20 years. He is the founder of Vonza.com – a SaaS company that makes it easy for entrepreneurs to start and grow a profitable online business. VONZA Founder/CEO

8 Ways to Grow your E-Commerce Business in 2022

7 Strategies for Marketing Membership Sites in 2022